8 Ways to Enter the Psychedelic Realm Without Drugs

Psychedelics are remarkable not only for their hallucinogenic nature but their ability to allow us to reach altered states of consciousness. These states of ‘higher consciousness’ have been sought after by sages, monks, and ascetics for millennia and have been defined by terms such as salvation, enlightenment, or transcendence.

In the present, psychedelics are revered by some on a spiritual journey who want to loosen the hold on their ego and ascend into levels above where human primitive minds typically reside.

Unfortunately, a daily encounter with a psychedelic drug isn’t possible, or recommended, for most people. Psychedelics can be used to boost or enhance the process but are not a direct or sustainable replacement for the major elements of a spiritual journey.

Yet, many people understand the mental benefit of having regular meaningful psychedelic experiences.  So then, how can we tap into the psychedelic realm without taking a substance? This may actually be more possible than you think! Let’s take a look.

Perhaps the original method of reaching altered states of consciousness, meditation practices have been found throughout human history, particularly in religious contexts, such as the growth of Hinduism and Buddhism. Today, it is one of the fastest-growing health trends in America, with the use of mediation increasing almost 3 times from 4.1% to 14.2% of the US population in the span of five years, according to a CDC report.

Though any meditation can have some mental benefit, the latter three methods can particularly help one achieve a psychedelic experience. Both meditation and psychedelic substances have been shown to induce an altered state of consciousness, and they may be more intertwined than you may think.

However, it would take a significant amount of discipline and practice in meditation to enter the psychedelic and spiritual realm. This learning curve can be drastically cut down with the help of a teacher as they are able to help lead you to some of these spiritual realms. Click here if you are interested in learning meditation techniques from one of our shamanically trained practitioners.

A sensory deprivation tank, also called a flotation or isolation tank, uses the aptly-named Restricted Environmental Stimulation Technique (REST). This means that incoming stimuli from light, sound, and even gravity are minimized during a period of time (generally anywhere from 45 to 90 minutes, although sometimes longer). 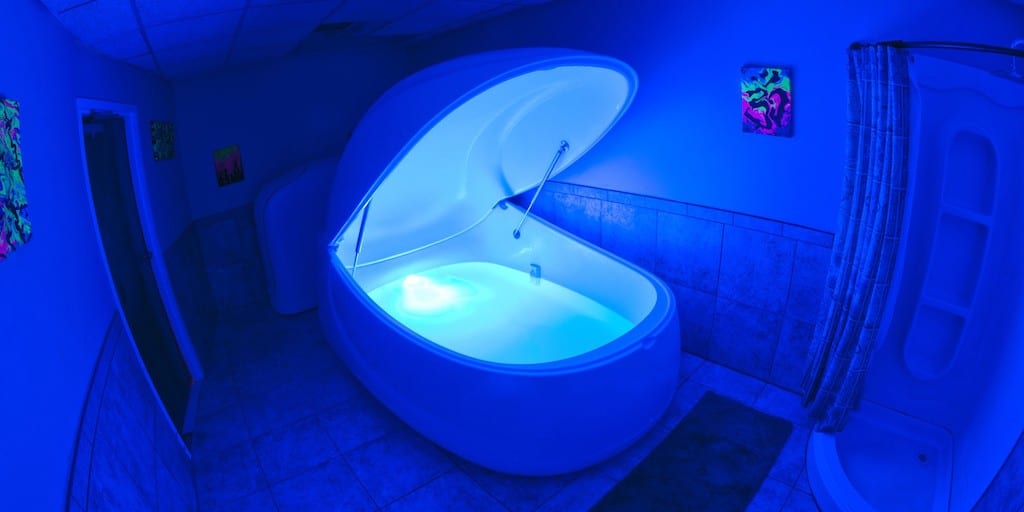 The sensory deprivation tank creator, John C. Lilly, was a neuroscientist who was interested in the origins of consciousness. To better study them, he created his first tank (which he would later use under the influence of ketamine and LSD).

Here’s how external stimuli is reduced in a floatation tank:

Not only are floatation tanks considered to be a beneficial way to reduce depression, stress, and anxiety and improve sleep, but they’ve also been known to produce hallucinations. Studies have also shown that floatation tank users also report significant changes in consciousness.

Some people report being merged with their environment, while others said, “I experienced past, present and future as an oneness.” Supplementing other mental health benefits, these experiences are also associated with increases in mindfulness, even long after the session is over.

Anechoic chambers are another type of sensory deprivation, one in which sound and magnetic waves are completely eliminated. There’s a popular one at Orfield Laboratories in Minnesota that is known as “The Quietest Place on Earth,” so quiet that the longest time someone has been able to endure it is just 45 minutes. 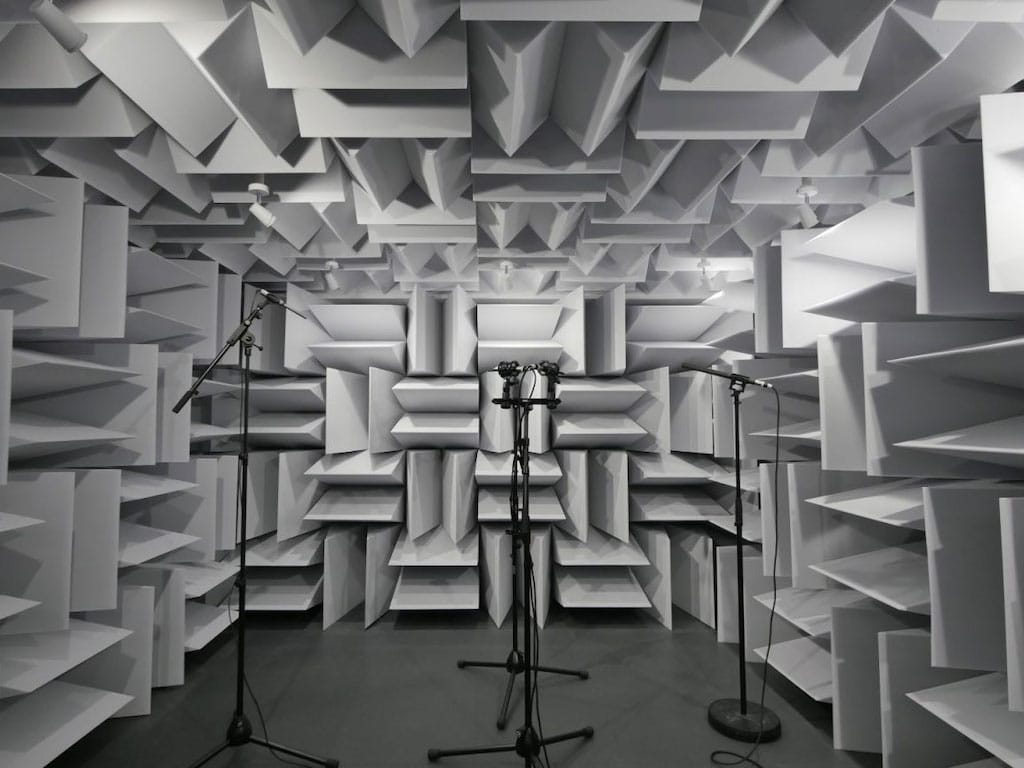 Without any sound, the ears will adapt to a new type of noise—that of our own bodies. In addition to hearing stomach gurgles, some people report hearing their own heartbeat and even their own lungs! Others have reported out of body experiences and mild hallucinations.

However, most anechoic chambers are built at university, government, and company laboratories, such as at Edwards Air Force Base and Microsoft’s headquarters, which are not available to the public. This makes standard sensory deprivation tanks more available than anechoic chambers.

Various breathwork techniques have been used by yogis for hundreds of years. More recently, in the 1970’s, holotropic breathwork re-emerged as a way to reach altered states of consciousness (without using drugs).

It’s based on the yogic practice of modulated breathing and involves controlling and quickening patterns of breathing. This alters the body’s levels of oxygen and carbon dioxide, often eliciting a psychedelic experience. The name “holotropic” itself translates to “moving toward wholeness” and, as such, holotropic breathwork has been used for decades to treat mental illness and other types of ‘spiritual emergencies.’ 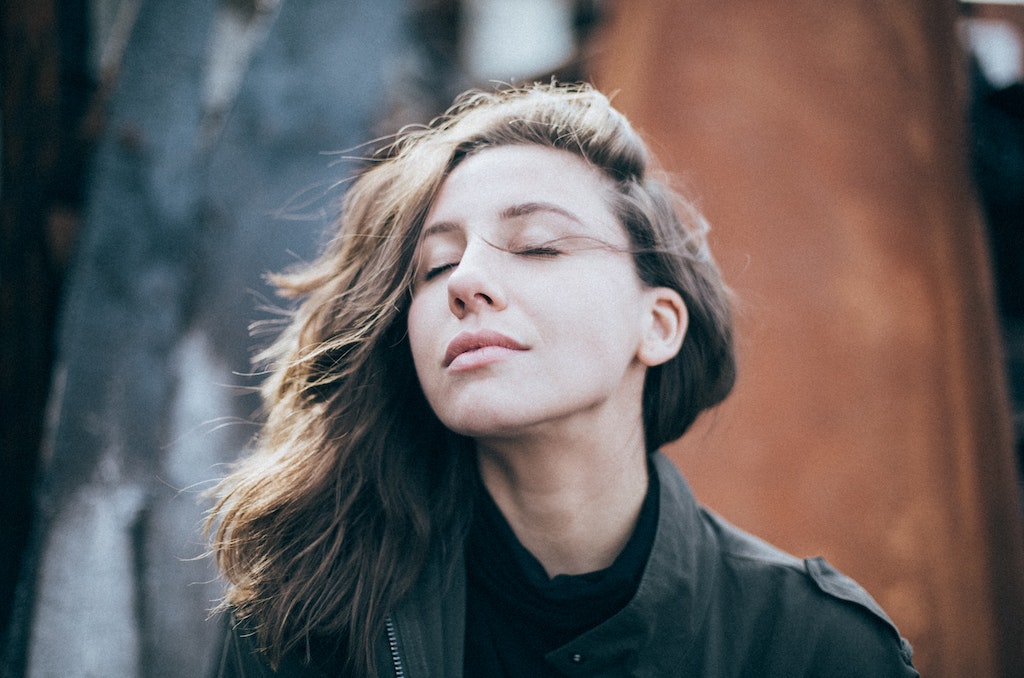 Holotropic works by allowing one to experience non-ordinary states of consciousness in a short two to three-hour session with a “sitter” (most commonly a trained facilitator). It is often accompanied by repetitive and then meditative music.

Though used for centuries in non-western cultures and regarded as a generally low-risk therapy, holotropic breathwork is not for everyone. Even the Grofs had a stringent screening protocol to ensure participants were physically and psychologically fit for the technique. Caution should be taken for those with a history of cardiovascular disease, heart issues, high blood pressure, respiratory problems, and pregnant women.

If you’re really short on time, money, and the ability to travel to a breathwork facilitator or float tank center, you can easily experience a hallucination at home!

YouTube has become home to several videos that promise to leave you asking, “What was that?!” One such video features a motion aftereffect (MAE) illusion, commonly known as the “waterfall illusion.”

This illusion works by prompting the viewer to look at something moving in a certain direction for a period of time. Then, when they look away, seemingly stationary objects appear to be moving. Another similar phenomenon was popularized by the Magic Eye book series in the 1990s where 3d images would appear in 2d prints. 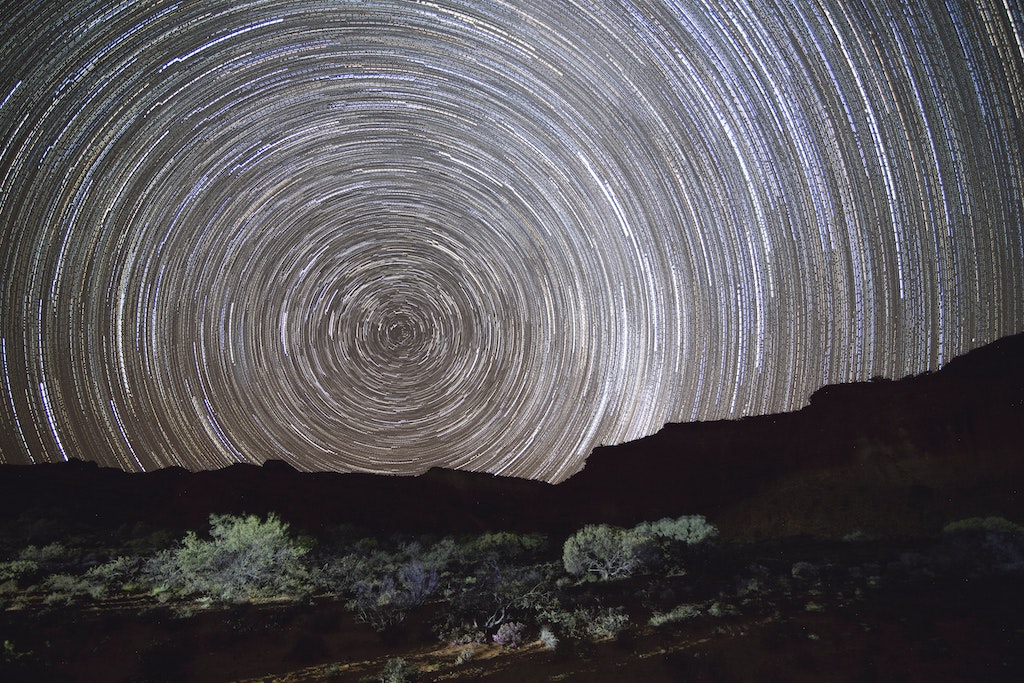 Although you don’t technically enter the psychedelic realm, you will feel short term hallucinations that often mimic those experienced after ingesting a psychedelic substance.

While theories about illusions like this date back to the times of Aristotle, illusions like the “waterfall illusion” are not yet fully understood. That said, however, anyone who has consumed LSD or psilocybin might notice some uncanny similarities between what they might see on their trip and what happens after this short video.

A different kind of “watching” can also produce some of the same effects as MAE illusions. Interpersonal gazing, or eye gazing, as it’s commonly referred to, is a phenomenon that’s become more popular in recent years.

Incorporated into wellness events, meditation retreats, or impromptu eye gazing sessions in the park, strangers and romantic partners alike are turning to one another for entrance into an altered state of consciousness. 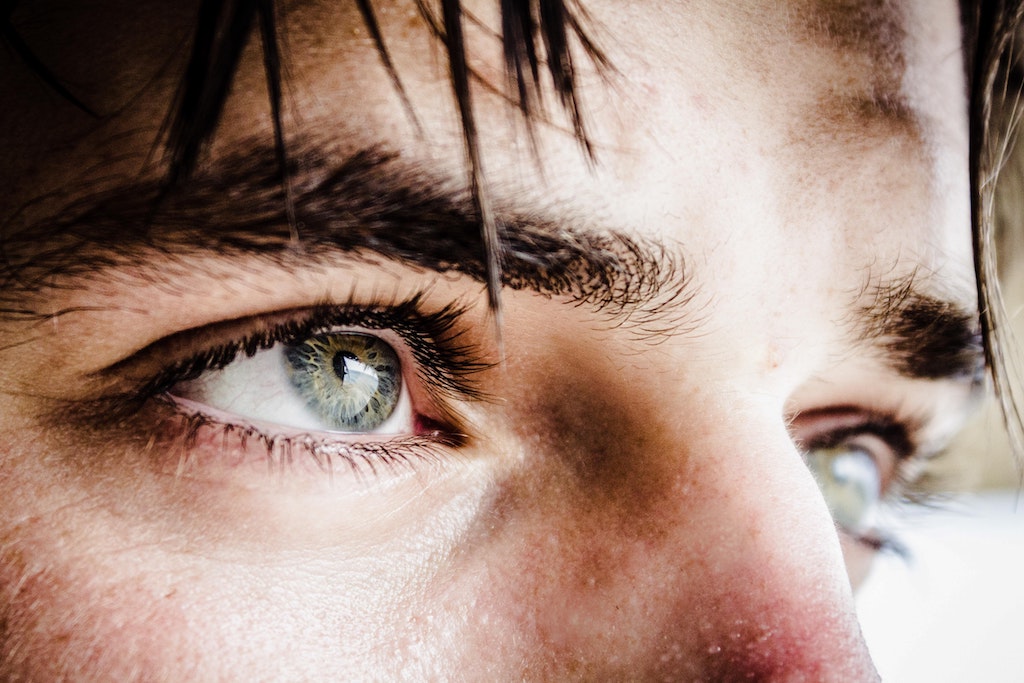 While people report feeling bliss, an altered sense of time, and connection with the present moment in just five minutes, full-blown dissociations have been reported in just ten minutes. These sometimes include hallucinatory-like apparitions and face dysmorphia and may also lead to lasting changes, like an improved ability to hold eye contact and maintain attention.

In Hinduism, kundalini is divine feminine energy concentrated at the base of the spine (the root chakra), and there are techniques to stimulate a transmission and release of this energy. Considered to be the energy associated with consciousness, but free of thought, this kundalini energy can be awakened through a practice of yoga, meditation, changes in diet, or simply on its own without aid.

Once activated, many people report a psychedelic-like effect—visions, flashbacks, emotional release, astral journeys, and bliss states. It may lead to someone feeling more empathetic or having a greater sensitivity to the world around them. People have reported becoming telepathic or developing psychic abilities.

There hasn’t been much research into kundalini awakenings, but some studies have reported neurochemical and neuroanatomical changes (like prefrontal cortex deregulation) that are consistent with those seen in someone using psychedelics. If you’re interested in experiencing kundalini energy, we encourage you to reach out to one of our shamanic practitioners today.

If you’ve read any of our other articles about psychedelic-assisted therapy or have taken the time to prepare the “setting” of your own psychedelic experience, you’ll know how important music is. Music and spirituality are deeply entwined, and the right music can enhance a psychedelic experience or even provoke one on its own.

Wavepaths, a London-based wellness startup has worked with psychedelic researchers to curate playlists perfect for a psychedelic experience. Taking it one step further, they’ve also been working on music that takes participants on a similar journey—without the use of any drugs. 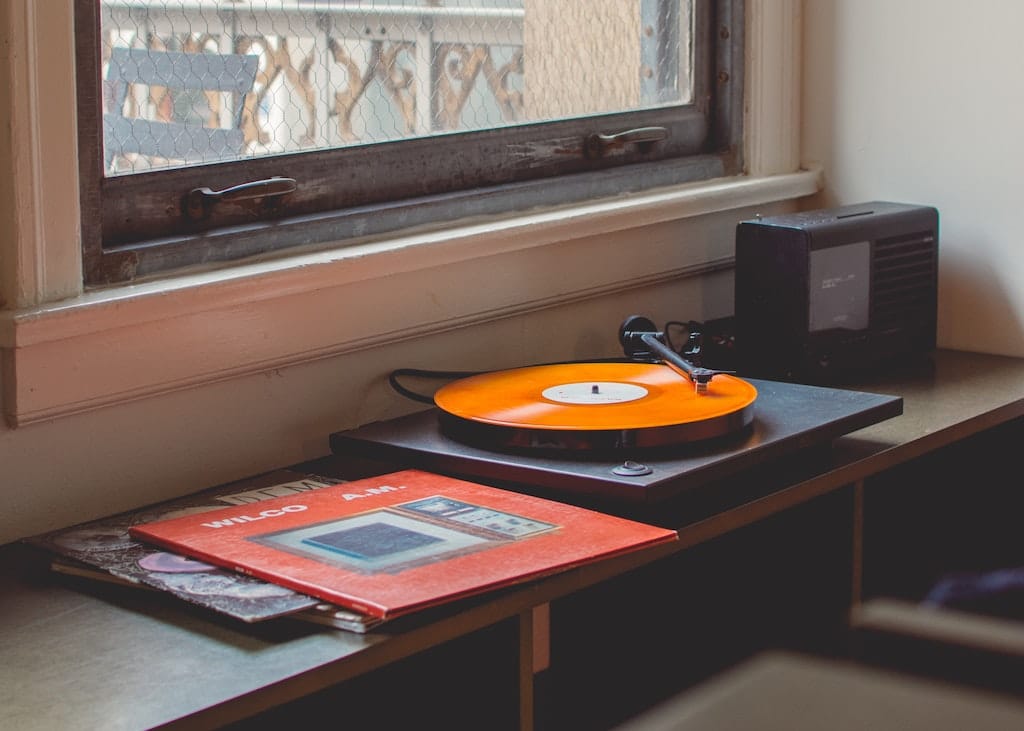 Now, they offer sessions with guides and have plans to scale up to offer their services to corporate partners and coworking spaces. Their music is designed to transport someone towards a state of calm.

If you want a sneak peak at what a Wavepaths session might entail, you can listen to one of their Psychedelic Therapy Playlists from home.

What if we were to tell you that you could tap into the psychedelic realm without anything at all? Well, that’s actually far more possible than you would ever think.

In a study published in March 2020, 33 students joined a study exploring how psilocybin affects creativity. They weren’t told that there would be a placebo group and were joined by study confederates who acted out a psilocybin trip to boost the expectations of the participants.

Astonishingly, 61% of participants reported feeling the psilocybin, some saying that the walls moved and others discussing a “come down” before another “wave” of the drug’s effects hit. Studies like these strengthen the notion that set and setting play a major factor in the psychedelic experience.

Tapping Into the Psychedelic Realm

These are all excellent ways to get a quick glimpse of altered states of consciousness. Some of them are associated with health benefits of their own, but none of these benefits are backed by as much scientific evidence as psychedelic drugs themselves.

Whether you’re curious about altered states of consciousness or know for sure that you want to incorporate psychedelics into your journey, we can help you out. It’s possible that you’ve had a session in a floatation tank or watched a few videos highlighting how holotropic breathwork can be beneficial, but if your psyche is hungry for something more substantial and meaningful, a psychedelic experience knows no substitute.

Our psychedelic facilitators can discuss your options and provide actionable information to determine if a psychedelic experience is right for your goals. If you’re looking for ways to access your subconscious beyond a 90-second YouTube video, get in touch with a trip sitter today.

Ready to Tap Into The Psychedelic Realm?